PETERSBURG, VA — Try to have a discussion with St. Bonaventure head coach Mark Schmidt about Andrew Nicholson and he’ll tell you about how lucky he was to have him commit.

He’ll no doubt mention how an ankle injury and the building of a new science building on campus were key ingredients in the Bonnies nabbing a once in a generation player.

While it’s true players like Nicholson do not come around often for a program like St. Bonaventure, a recruit talented enough to play in a higher conference but rather try to make an impact at a smaller school, Schmidt may have struck lightning twice.

Take a look on the hardwood and it’s hard to ignore the similarities.

There he is. A tall and lanky string bean standing at 6-foot-10 with arms that hang well below his knees. See the way he gets position in the paint, backing defenders down with ease before skying over them with a baby hook.

Hear the way he throws down a thunderous slam while wearing No. 44, a number made special in Bonaventure lore by Nicholson. And finally take a look at the player wearing the jersey and you can be forgiven for having flashbacks because he too, resembles Nicholson.

His name is Jordan Tyson, a member of Fishburne Military Academy and a verbal commit to St. Bonaventure, a school Tyson admitted he had no idea where it is located. But what he did know was how highly the coaching staff thought of him when it was Schmidt who made the first contact with the Fishburne product. 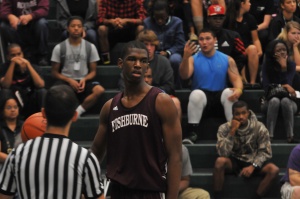 “It was great because it was such a unique experience, recruiting wise,” Tyson said. “I’ve never had a head coach come up to me that excited and offer me right on the spot … I guess he saw a lot of Nicholson in me and people even say I look like him.”

And while his looks may lead Bona fans to have a double-take, it’s his play on the court which will give them goosebumps.

Facing Richard Bland College, a member of the National Junior College Athletic Association, in an exhibition, the Bona recruit starred in limited minutes. All it took was two minutes upon entering the game for Tyson to have an impact.

Backing down his man in the post, Tyson established position in the blocks as he received a bouncing entry pass. With one quick pivot, Tyson turned to his right and floated in a hook over his defender in the middle of the paint.

It’s an example of how polished his game is compared to Nicholson who famously did not play basketball until his junior year of high school. In fact, Tyson’s teammate, USC commit Jabari Craig is similar in that regard.

Yet, to Fishburne head coach Ed Huckaby Jr. there is no comparison as to who is the better player.

“He is polished offensively,” Huckaby said of Tyson. “He goes left hand, right hand, he’s got it. You add 30 pounds to that and it’s on. He’s better than Jabari Craig. I’m watching it everyday.”

And it’s hard not to agree with a coach with 25 years of experience at both the high school and collegiate level who also helped develop 47 all-conference athletes and 22 professional athletes.

Huckaby looks at Tyson and sees an athletic big who can play inside and outside by stretching the floor with his range. While strength will be the biggest aspect he needs to work on, Tyson had no problem with taking it to the hoop twice to finish thunderous dunks.

The only thing more impressive than his play on the court is his lofty goals which, you guessed it, echo the words Nicholson spoke of after Bona captured the 2012 Atlantic 10 Conference Championship. The senior spoke of committing to St. Bonaventure to bring the Bonnies back, something Tyson also expects to be able to accomplish.

“I love that basketball is the top sport because when I come in there, I’m going to change the culture to make it a winning culture,” Tyson said with a purpose. “I know everyone says it, but that’s my real goal.”

For those who know him like Huckaby, it’s just an example of Tyson’s competitive nature. The lanky forward never backs down and commits 100 percent to the task at hand which during the scrimmage was to focus on boxing out and rebounding, both of which he accomplished.

Yet, Tyson also showed off some of his athletic ability Huckaby speaks so highly of as he helped start a fast break with a rebound, ran the full length of the court and skied for an alley-oop attempt which just missed the connection.

It all adds up to a play his head coach said Bona will be ecstatic to have.

“He’ll play immediately at St. Bonaventure, no question in my mind, because he competes,” he said of Tyson. “They got a hell of a gift, I can’t lie. I don’t know how they pulled it off but congratulations to Jeff Massey because he got that done.”

While Tyson may never be another Nicholson, it’s clear Schmidt has once again nabbed a talent he had no business being in on, helping to continue the building of a successful program at St. Bonaventure.