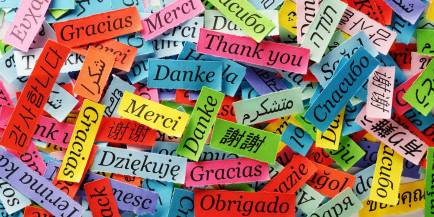 By: Kelly Haberstroh and M.K. Killen

The attendees, from Cattaraugus and Allegany counties, arrived on campus at 8:30 a.m. for the day-long Festival of Languages & Cultures.

“This is the first event celebrating languages and cultures in a long time. There was something similar many, many years ago,” said Dr. Alva Cellini, leader and organizer of the event. “The event includes languages SBU doesn’t even teach.”

More than 40 Bonaventure student volunteers, along with numerous faculty and a committee of faculty and staff, helped organize and execute the event. The personnel involved set up language workshops covering Arabic, French, German, Italian, Latin, Japanese, Chinese and Hebrew.

By 11:30, the visiting student groups returned to the Reilly Center Arena to participate in song and dance competitions. Awards were presented to the winners of the singing, dancing and poster contests before the students enjoyed lunch and a meet and greet with current university students.

At the second session, student athletes from softball, men’s swimming, basketball, rugby and soccer educated the visiting students about their respective sport. Each group took a different approach to educating the high schoolers. There were games, discussion groups and Q and A sessions.

Junior Imani Outlaw quizzed the students on their newfound knowledge at the end of the session, asking, “Where was basketball invented?”

Cohen said the event promoted interaction with current and prospective students, serving as a fun and collaborative competition.

“It is important for everyone, especially young people, to be familiar with another culture or language,” said Cellini. “As a university, educating people about different cultures and promoting students attending Bonaventure are important tasks.”

Cellini said she hoped that after the event, students would realize they don’t have to go far away to learn about these things and experience a great university.