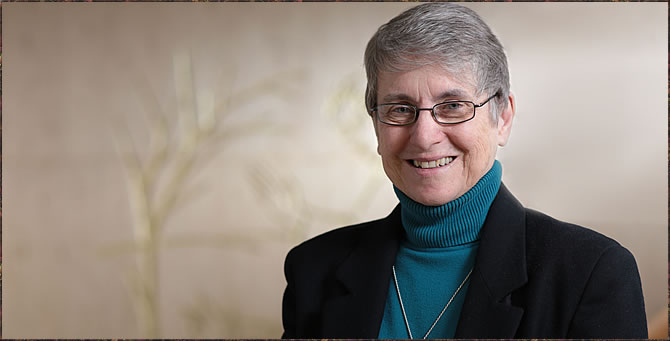 Sr. Margaret Carney, O.S.F., who will step down from her post as St. Bonaventure’s president this summer, spoke in Hayes Conference Room in Doyle Hall on April 19, discussing her intentions after her tenure concludes and reflecting on her time here.

Carney assumed her position as the university’s 20th president in 2004, the year after its men’s basketball scandal. This transgression involved her presidential predecessor, Robert J. Wickenheiser, allowing an ineligible transfer student to acquire playing time.

“I helped the university recover by making clear that our goal as a university was to rebuild our reputation,” said Carney.

Holding degrees in historical theology, Carney studied the lineage and understood the importance of the Catholic Church worldwide, a perspective that guided her presidency.

“There’s 2000 years worth of homework that gets us to this point,” said Carney.

Within her 12-year span as president, she pinpoints her favorite memory as the 150th anniversary celebration, a series of events and activities held from March 2008 to May 2009 to commemorate the university’s growth over one and a half centuries.

“That anniversary gave us a chance to look back at our history and to realize that the university had survived all kinds of challenges over basically 15 decades,” said Carney. She said these challenges included the Great Depression, a crisis during which friars worked without pay.

With Carney’s presidency coming to an end on July 31, the university plans to find an interim president in time to temporarily take her place.

Carney, 74, said she had no idea who her replacement will be. She said she only hopes the university won’t lose momentum during the transition.

“My biggest concern is that people think that an interim year is a year to just slow down. It’s not. It’s a bridge,” said Carney. “That person will have the authority to make the kinds of decisions a president needs to make.”

After she steps down, Carney said she doesn’t plan to secure another administrative post on university grounds. Instead, she will take one year of sabbatical, a paid leave Bonaventure allows a faculty member to pursue every seven years.

In 20 years at St. Bonaventure, from serving as the dean and director of the Franciscan Institute to becoming the university’s president, Carney never took a sabbatical.

She said, however, that her first sabbatical will most likely be disrupted by medical procedures.

Diagnosed earlier this year with multiple myeloma, a form of blood cancer, Carney still managed to continue doing her job through this semester.

“I tire a little bit faster at the end of the day, but I’m able to put in a normal working day,” said Carney.

Upon her announcement addressing her health via email, Carney’s friends and colleagues as well as current students and alumni sent her their support.

“Every get-well card that’s ever been printed in the last two years has been delivered to me,” said Carney. “Some days, I just can’t get over it. It’s been really beautiful.”

Soon after she leaves her post, Carney said she hopes the university will commence thorough renovations of both Plassmann Hall and The John J. Murphy Professional Building. According to Carney, the university doesn’t possess enough revenue to pay for the renovations, so it would have to raise the money, either from private donations or foundational grants.

As for personal goals, Carney said she intends to become more proficient with social media tools, such as Twitter. Additionally, she said she wants to catch up on her professional scholarship in Franciscan Studies, read more, complete any unfinished projects and make pilgrimages to Assisi.

In regards to what she would have done differently, Carney said she wishes she made steps in changing the way the university delivers the core curriculum. She said St. Bonaventure didn’t structure Clare College to make faculty members enthusiastic about teaching its courses.

“People assumed a lot of new faculty would be hired just to teach those courses, and that never happened,” said Carney. “It’s so hard to get people to teach Clare.”

In leaving the university, Carney said she’ll miss constantly being around students and their influence on her to stay current with pop culture through such experiences as her annual interview on WSBU’s airwaves.

“By living in a world where your focus is always on the new generation of people coming into adult life, it keeps you open to a lot of perspectives of what’s going on in the culture that, when you are always with people your own age, you’ve stopped paying attention to.”

One thought on “Carney reflects on time as president”