Some news and notes from Big 4 Basketball Media Day on Wednesday:

Throwing it back: Fans participated in a vote over the summer to determine which throwback uniforms Bonaventure, Buffalo, Canisius and Niagara would wear in the Big 4 Classic doubleheader on December 17.

The 1969-70 Final Four jerseys were the presumptive favorites, leading for much of the poll, so consider this one an upset: SBU is wearing the uniforms from its 1976-77 NIT championship year. Since this is the 40th anniversary of that season, it’s fitting that these are the threads the team is going with. 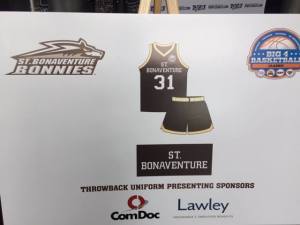 Schmidt to play nine: Coach Mark Schmidt called depth “so overrated” in a Bona Blog Q&A earlier this week, and he stated on Wednesday that he was going to have a nine-man rotation. He thinks one of the benefits will be competitive practices.

“We’re gonna play nine guys, so they’ll be three or four guys that don’t play,” he said. “The more the competition, the better the players. If you come to practice knowing you have a spot, it’s human nature (that) you won’t work as hard. I think competition drives you, and that’ll be a positive for our team.”

Moving on up front: Schmidt didn’t mention outgoing transfers Jordan Tyson and Derrick Woods by name when he was asked about replacing them. He did, however, seem confident in newcomers like David Andoh, Josh Ayeni, Amadi Ikpeze and Chinonso Obokoh.

“We lost like six points and three rebounds on the two kids that left,” he said. “So hopefully the guys that we’ve brought in can do that and do more. But it’s yet to be determined; we’ve just done individual (workouts).”

Andoh injury update: Andoh, a senior forward, underwent foot surgery in August, but is expected to be ready for the season.

“He started running,” Schmidt noted. “He’s out of the boot and his whole thing’s gonna be getting in shape. I think his foot is now healthy… but as (Patriots coach Bill) Belichick says, I’m not a doctor, I’m a coach.”

Adams after Adidas Nations: After Adams participated in the Adidas Nations Showcase in July, Schmidt said he has more confidence and the program has some more prestige.

“I think he was (picked) the eighth best player out there; I don’t know who votes,” Schmidt said. “But it gives him added confidence and I think it does a lot for a program too… It gives us credibility, it shows that we can get that caliber of a player and it shows our players that Jay wasn’t heavily recruited, but if you have a great work ethic you can be really successful at Bonaventure.”

Obokoh expectations: Obokoh, a grad transfer from Syracuse, is projected to start at center for SBU. Schmidt thinks he could play 25 minutes a game.

“It’s still a process for him, but we’ve got a veteran guy with some strength that can rebound and play defense,” Schmidt said. “You have to be determined, and he’s doing well so far but we haven’t started practice yet. He’s a fourth-year senior, so he’s been through it even though he didn’t play a lot at Syracuse. He’s practiced against really good players, so we’re hoping he’s gonna be a big part of our success this year.

“You don’t bring in a transfer to sit him on the bench. Our expectations are for him to be a productive player.”

Reilly Renovations: As work continues to finish the renovations on the roof, floor and scoreboard in the Reilly Center, the team has been doing individual workouts in the campus’s Richter Center exercise facility.

“We haven’t had the court for the first month, which you always want to practice on your own court,” Schmidt said. “But it’s something we have to deal with and the court looks great. If we had to not practice there for a month and have those renovations done, it’s more important to get those renovations.”