BROOKLYN, NY — For the first time since 2017, the St. Bonaventure men’s basketball team will have to play on Thursday in the Atlantic 10 tournament.

After an 11-7 regular season in the A10, Bona is the No. 5 seed at the conference tournament, which will take place at Barclays Center in Brooklyn, New York, from March 11-15.

The Bonnies dropped their season finale to Saint Louis last Saturday, which erased their hopes of a top-four seed and a double-bye through the first two rounds of the tournament. A win in the game would have landed Bona at No. 4, meaning it would not have had to play until Friday.

“Two of the last four teams that have won (the tournament) have played on Thursday,” Bona head coach Mark Schmidt said. “It’s not like no one has done it. You’ve just got to be playing well and get some momentum. It’s ‘game seven’ for the next four games, and hopefully we can win those game sevens.”

Bona returns three starters from that team, including now-sophomore Dominick Welch, who averaged 12 points and seven rebounds per game in three A10 tournament games a year ago. Welch scored 20 points in Bona’s quarterfinal win over George Mason.

“It gives me confidence knowing how well I played there,” Welch said. “We’ve let the new guys know that it wasn’t easy, and we’ll really have to prepare. Last year, we got off to a slow start because we weren’t used to the setting and the rims, so (we need to) make sure we get our shots up and are prepared.”

Schmidt said that the experience his team got playing deep into the tournament a year ago can only help it this time around.

“It certainly won’t be a negative,” Schmidt said. “They played well in pressure situations, and the more experience you get the better you’re going to be.”

Kyle Lofton and Osun Osunniyi, both sophomores, also started all three tournament games for the Bonnies a year ago. Lofton averaged over 16 points per game to earn him all-tournament team honors, while Osunniyi averaged seven points and eight rebounds per game.

This year, Bona’s path back to the championship game is anything but easy.

“It’s one game, and we can’t worry about what’s happening on Friday, Saturday or Sunday,” Schmidt said. “If you lose you go home, so our mindset is to prepare the best we can for St. Joe’s or George Mason.”

Then, if the Bonnies can beat the same SLU team that thrashed them, 72-49, on Saturday, they’ll set up a date with No. 1 Dayton on Saturday afternoon.

For players that weren’t around for last year’s tournament run, such as Jaren English, the opportunity to win a championship is exciting.

“We have the opportunity to win a championship, which would band us together as a team here forever,” English said. “Everybody talks about the 2012 team with (Andrew) Nicholson, and it would be a great honor to be talked about as we go on in our careers and come back to Bonaventure.”

The sophomore guard has college postseason experience, as he helped lead Ranger Community College to the National Junior College Athletic Association Division I championship game a year ago.

English has since had a breakout year for the Bonnies, averaging nearly 12 points per game this season.

“We want to get down there and show people that they can’t cross us off of their list,” English said. “We’ve got high hopes and we believe that we can win, and that’s all you really need.”

Bona’s game on Thursday will be broadcasted on NBC Sports Network, as will its quarterfinal game if the Bonnies advance to Friday.

“Preparation is important, but you’ve got 24 hours after they play,” Schmidt said. “So, the preparation isn’t going to be as important as just going out and playing, and doing what you do best.”

Below is the complete tournament bracket. 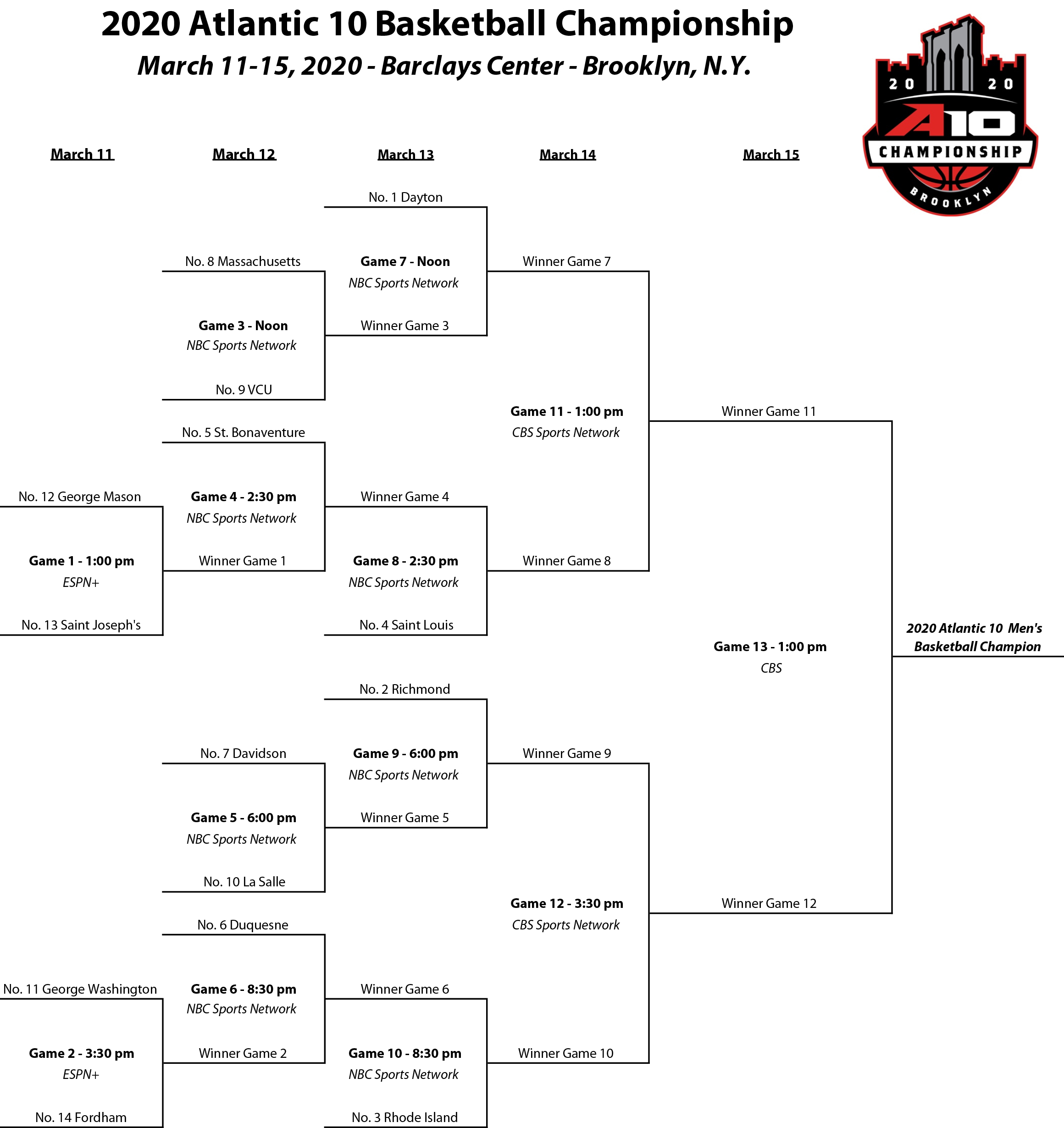