Part of The Intrepid’s “The Genius Of…” series.

“Your favorite rapper’s favorite rapper” is the utmost praise an emcee can earn in their career. MF DOOM, or DOOM for short, garnered this acclaim before his untimely passing last year. Yet, I bet many of you have no idea who DOOM was. That was part of his genius.

Just remember, it’s all caps when you spell the man’s name.

The very first feature of DOOM you noticed was his mask. I thought at first, why the hell is he wearing a mask? According to DOOM, he rarely revealed his face to the public. He wanted his audiences to revere his emceeing abilities over any of his other extraneous features.

You can see that DOOM wasn’t your prototypical celebrity or entertainer. His luminescent, silver Doctor Doom mask enthralled any eyes that glanced upon it, and, ultimately, the mask further enhanced DOOM’s mystique.

MF DOOM is arguably the most inconspicuous hip-hop legend ever. No sources could detect or verify any of DOOM’s personal information besides him and maybe his wife and his closest friends. For the longest time, the general public didn’t even know his birthday.

And peep this—you could attend an MF DOOM show, and not have even seen DOOM. Yes! DOOM had doubles he used to substitute for himself!

MF DOOM also had many self-proclaimed monikers that contributed to the shield around his actual identity. Each of his aliases had distinct personalities and styles of rapping, along with their own albums and projects. MF DOOM also featured his own personas in songs to make an even greater distinction between his true self and his aliases. 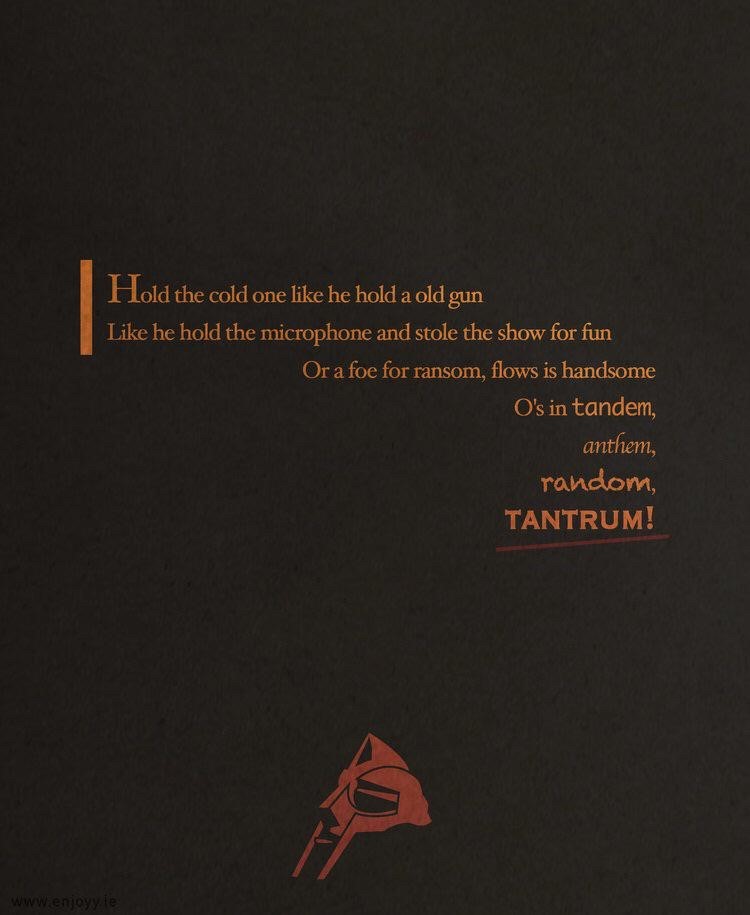 DOOM’s hip-hop career, and everything that surrounded it, was rather abstract. He spelled his name using all capital letters, even though DOOM doesn’t stand for a damn thing. No one else in hip-hop had DOOM’s distinct cadence, flow, lyricism and voice.

His rhyme scheme, specifically, was quite eccentric because of his elite ability to deceive the listener. DOOM would take words and phrases from everyday prose and leave them hanging on a cliff or replace the word we expect with an unexpected word or phrase.

Take his song ‘Great Day’, off his classic album Madvillainy, featuring Madlib. MF DOOM had a classic example of this when he rapped:

We all know what word rhymes with ‘twitches’ that would be more ideal for a sentence pertaining to a party. We’ll leave it at that.

So you may never have seen or heard of MF DOOM. In some ways, it seemed like he wanted it that way. The inconspicuous emcee, the metal-faced villain, became a legend of the hip-hop zeitgeist. In my opinion, there will never be another DOOM.

(Akim Hudson is a feature contributor for The Intrepid.)